ProPublica is a nonprofit newsroom that investigates abuses of power. Sign up for ProPublica’s User’s Guide to Democracy, a series of personalized emails that help you understand the upcoming election, from who’s on your ballot to how to cast your vote.

Veterans Affairs Secretary Robert Wilkie headlined a fundraiser for the North Carolina Republican Party last week, taking time away from his job leading the government’s second-largest agency at a moment when COVID-19 cases are surging in VA hospitals.

Though legal, campaigning by cabinet secretaries is a departure from historical norms. Nevertheless, it’s become standard practice in the administration of President Donald Trump. Secretary of State Mike Pompeo has hit the campaign trail for Trump, and several other cabinet members recently visited Iowa. Seema Verma, the administrator of the Centers for Medicare & Medicaid Services, is also campaigning in North Carolina. Trump himself has routinely blurred politics with official functions, most prominently by hosting the Republican convention on the White House lawn, and he’s brushed off more than a dozen staff violations of the federal Hatch Act, which limits political activity by government employees.

Wilkie, in particular, was already under fire for frequent trips that appear to have partisan agendas. In a letter last week, the top Democrats on the House and Senate veterans committees accused Wilkie of using taxpayer-funded travel to boost Trump and other Republican candidates.

“Leaders at VA have historically risen above partisan politics,” Senate veterans committee ranking member Jon Tester of Montana and House committee chairman Mark Takano of California said in their letter to Wilkie. “Furthermore, efforts to engage in overtly political activity may have come at the expense of legitimate functions of the department’s mission.”

The letter highlighted Wilkie’s previous official trips to North Carolina, Maine and Montana for appearances with GOP senators in tough reelection races. The partisan tilt of the Montana trip was especially pronounced because it included no events with Tester despite his key post on the Senate panel that oversees the VA.

Wilkie’s latest visit to North Carolina, his home state, was not part of an official trip, according to the VA’s response to a Freedom of Information Act request. That indicates his fundraiser appearance wasn’t paid for by taxpayers. Wilkie’s spokeswoman declined to say who footed the bill for his travel or why he was in North Carolina on a weekday instead of at his job.

“He attended this event as a private citizen,” spokeswoman Christina Noel said.

The party’s financial disclosures, which might show donations and expenditures connected to the event, are not yet available for that time period. The North Carolina GOP’s finance director, Amanda Parrish, didn’t respond to messages seeking comment.

The event took steps to comply with the Hatch Act. The invitation, obtained by ProPublica, omitted Wilkie’s official titles, referring to him as “honorable” (a general signifier for people who have been Senate confirmed). The invitation also said “his participation is not a solicitation for funds,” but it listed suggested donations ranging from $250 to $2,500. 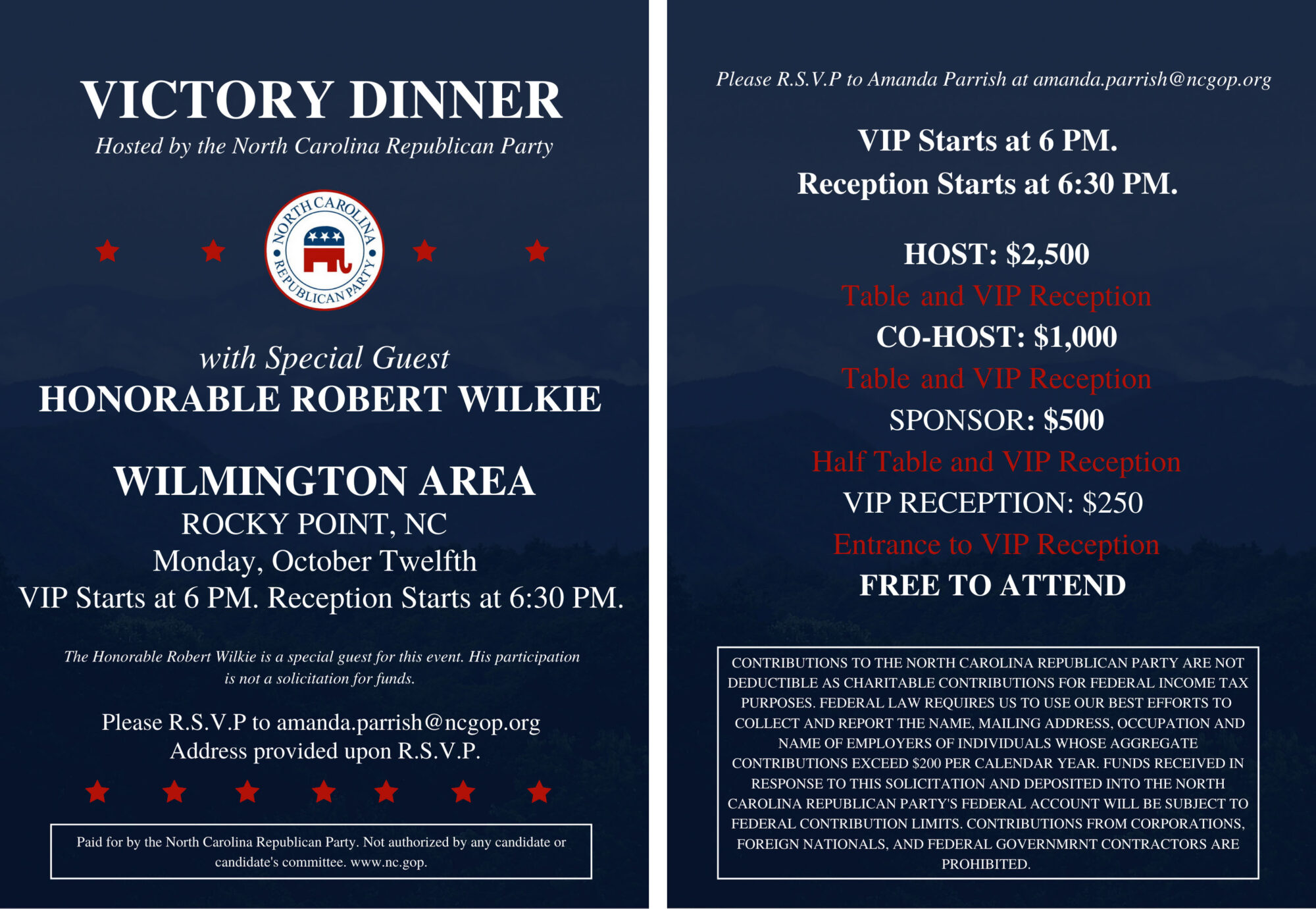 The invitation to the fundraiser.
Obtained by ProPublica

The email accompanying the fundraiser invitation said the organizers wanted “this event jam-packed (within CDC guidelines).” But a photo posted on Facebook by the state party chairman showed people indoors less than 6 feet apart and not wearing masks.

Noel declined to comment on what public health measures Wilkie observed to participate in the event.

Wilkie speaks to guests and poses with Michael Whatley, chair of the North Carolina Republican Party, in photos posted by Whatley.
via Facebook

From North Carolina, Wilkie traveled to Arizona, Utah and Colorado for what appeared to be official functions, according to posts on his Twitter account.

A former aide to North Carolina’s endangered incumbent senator, Thom Tillis, and former Sen. Jesse Helms, Wilkie is widely viewed as aspiring to elected office in the state. North Carolina’s other senator, Richard Burr, is not seeking reelection in 2022. Noel didn’t respond to a question about Wilkie’s political ambitions.

Wilkie has faced criticism for appearing disengaged from the VA’s critical programs. He’s also under investigation by the department’s inspector general for allegations, which Wilkie has denied, that he attempted to collect dirt on a congressional staffer who said she was sexually assaulted in a VA hospital. The results of the probe are expected soon.

The VA hospital system currently has almost 4,500 active cases of COVID-19 (including veterans and employees), a 70% increase from a month ago. More than 3,700 VA patients have died of the virus.

Veterans are a key constituency for Trump, a favorite topic in his tweets and at rallies. The VA is accommodating more political events this year by relaxing a long-standing policy that discourages site visits by political candidates close to an election. Noel didn’t respond to a question about the change.

Do you have access to information about the VA that should be public? Email Isaac Arnsdorf at [email protected]. Here’s how to send tips and documents to ProPublica securely.

For more coverage, read ProPublica’s previous reporting on the VA.

Sourced from Articles and Investigations – ProPublica

Forest patches amid agriculture are key to orangutan survival: Study

Forest patches amid agriculture are key to orangutan survival: Study