There’s a reason outspoken environmentalists are often described as “tree huggers” — deforestation is one of the most visible and measurable expressions of the damage humans inflict on Earth. Protecting trees is also one of the most productive, viable paths forward when it comes to removing carbon — planting a trillion of them potentially could capture up to two-thirds of the CO2 emitted since the industrial revolution.

But planting new trees could be a futile exercise if companies don’t address an ongoing problem few enjoy talking about: how to avoid cutting trees down in the first place, especially those in tropical rainforests.

Yet, nearly half of the companies most reliant on key commodities that have a negative impact on forests — palm oil, soy, beef, leather, timber, and pulp and paper — don’t have a publicly stated policy on deforestation, according to the latest annual Global 500 report by Global Canopy, an environmental organization focused on protecting forests.

And neither do some of the massive financial services companies that finance them — the same ones that profess to be looking far more closely at climate-related risks.

The analysis includes the 350 companies and 150 financial institutions that have the most influence on forest-related commodity supply chains, and little progress has been made since the first publication in 2014.

“Forest risk commodities are in almost everything we eat, from beef in ready meals and burgers, palm oil in biscuits, to soy as a hidden ingredient in poultry and dairy products,” said Sarah Rogerson, the report’s author, in a statement. “Many people would be shocked to know how many familiar brands in their shopping basket may be contributing to the destruction of the Amazon and other tropical forests.”

That includes massive e-commerce and cloud services company Amazon, discount clothing retailer TJ Maxx and the world’s largest luggage company, Samsonite — none of which have a deforestation policy, at least one that they disclose. Ditto for four of the biggest institutional investors: BlackRock; Vanguard; State Street; and Fidelity Investments.

The largest U.S. food company, Tyson, doesn’t have one either, although it kicked off a deforestation risk assessment with Proforest (a Global Canopy partner) in October and joined the Roundtable for Sustainable Soy in September.

Tyson has said it will use the assessment to develop a policy during 2020. A spokeswoman confirmed this strategy is under development; over the past two years, the company’s international presence has expanded from two countries to nine, which has required Tyson to reassess its risks, she said.

The annual rate of deforestation is astounding, and it’s not abating. According to the World Resources Institute, nearly 30 million acres of “tree cover” were lost in 2018, the fourth-worst year on record. Last year, 8.9 million acres of primary rainforest disappeared, an area roughly the size of the country of Belgium. The three worst countries (by total area lost) were Brazil, the Democratic Republic of Congo and Indonesia.

Yet, since the last report, some companies have walked back their commitments, including Avon Products and Woolworths Group. Others removed the deadlines associated with them, such as Mars, which altered its palm oil policies. Some dropped their commitments entirely, including Japanese food company Yakult, Norwegian consumer products firm Orkla Group and a farm cooperative from Denmark, Danish Agro.

The net effect is that corporate progress on deforestation has barely budged in the past six years, according to the report.

One simple reason is that there is no one-size-fits-all formula to working on the ground with supply chains. Consider the case of Cargill, which acknowledged in summer 2019 that it would be unable to meet its pledge to halve deforestation in its supply chains by 2020 — with the intention of eliminating it entirely by 2030.

Ruth Kimmelshue, business operations and supply chain, chief sustainability officer at Cargill, addressed that shortcoming during an interview earlier this month at GreenBiz 20.

Cargill has created a forest panel, made up of NGOs, academics and others to advise it on the path forward, Kimmelshue said.

Cargill is actually listed in the report among companies planting the seeds for stronger forest protection strategies. The analysis recognizes leaders for both individual commodities and for specific industry sectors, but even the high-scoring companies have significant room for progress.

For example, the highest score for any company on leather was 52 out of a possible 100; the average among all companies was 13. In beef, the best performer received 68, far higher than the average of 13 for the category.

The companies were scored on overall approach, commitment strength, reporting and implementation, and social considerations. They were only assessed for commodities specific to their supply chain. 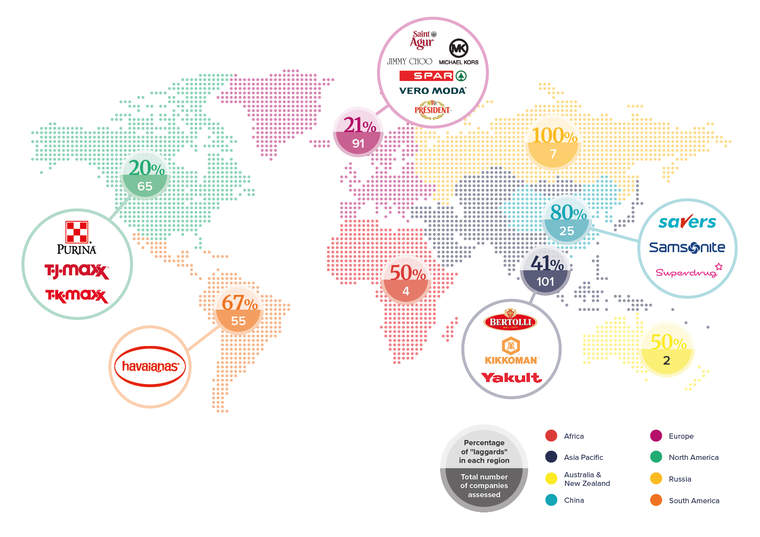 Here are the companies ranked highest at the commodity level:

And here are the leaders for their industry sector:

Of course, you shouldn’t forget to follow the money. Among the 150 companies assessed by the report, close to 70 percent had no deforestation commitments at all. That said, 39 of them improved their scores since the last report. Among the ones making the biggest leaps ahead were Commonwealth Bank of Australia, which introduced a cross-commodity policy; Barclays, which published a new forestry and palm oil statement; and Morgan Stanley, which updated its environmental policy to require companies that produce palm oil be certified to the standards set by the Roundtable on Sustainable Palm Oil.

The highest-ranking bank was France’s BNP Paribas, although it recently was implicated in financing for companies with poor records on deforestation.

“We believe ending deforestation is imperative — for investors and society at large,” the bank noted in a blog published in May. “As fiduciaries, we continue to deepen our understanding of this multi-faceted issue and work with other organizations to find the most effective solutions. We will engage with investee companies through dialogue and proxy voting.”